I was recently able to finish reading Nick Hornby’s “Juliet, Naked,” an excellent little novel about music nerds and aging rock stars and women who feel they are past their prime. Great book, highly enjoyable, but also very interesting for how Hornby approaches some of the Millennial concepts/ concerns that I detail on this blog.

Quick recap: Here, Hornby again tackles the dual perspective novel, though with “Juliet, Naked,” he isn’t quite so ambitious as the four-narrator “A Long Way Down,” this time choosing to focus on just Annie (discontented and aging woman caught in a mediocre relationship) and Tucker (once-famous rock star, now living in obscurity). And although I thought “A Long Way Down” was a fine novel, I’m much happier with “Juliet, Naked” overall. This is Hornby writing about music, and–with the possible exception of sports–there’s nothing I’d rather see him write about.

The characters are drawn with the same confessional pen as Hornby’s other protagonists, and there is–as always–equal parts humor and heartbreak. And it’s sharp and emotionally affecting because it’s so honest: sometimes, just hearing Annie or Tucker speak is enough to cut your soul. 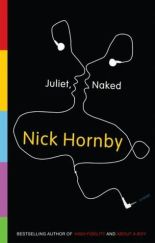 The most lasting aspect of the novel, though, was in its critique of the online message-boarding communities, clusters of super-fans worldwide who–now, in the internet-connected digital age–discuss ad nauseum and with cultish vigor their favorite celebrity or subject, focusing so intently on an individual’s life and sharing information and commentary with such fervor that you might think these message-boarders were instead magazine editors and writers. Hornby is honest with these characters, and though it sometimes feels as if he is lampooning them, he does treat them fairly, letting their actions becomes his critique and never intruding too heavily with his own voice.

This is an important aspect of the book, though: a focus on how the internet has changed the way we communicate, has changed the way we form and maintain friendships. Though Hornby is not the first (nor will he be the last) to explore the message board communities, his novel offers one particular example of how the comment boards can influence lives/

“Juliet, Naked” is also an interesting read for its use of Wikipedia pages, something entirely unexpected (Hornby isn’t a big “mixed-media” writer, and I don’t know that I’ve seen much real extra-textual experimentation from him). Here, we also seem to have a sort of critique on our current culture, as the pages themselves are likely the product of a supporting character, Annie’s old boyfriend Duncan, one of the message-boarders. Again, Hornby won’t be the last to explore Wikipedia’s influence over our lives, how it shapes our knowledge and is shaped by those who have some stake in the knowledge that it offers, but it’s an interesting inclusion nonetheless. And if you’ve ever read Hornby’s “Polysyllabic Spree” or “Housekeeping vs. The Dirt,” you know that he has a problem with “alternate history” novels, those books–like “The Plot Against America” and “The Yiddish Policemen’s Union”–that sometimes allow the characters to speak at length about how different their world is than ours, which Hornby claims (for him) kills the illusion of the alternate reality, since the characters (if their voice were true) would not need to educate the audience about how different their world is than ours. Here, Hornby cleverly circumvents this “voice flaw” by allowing the Wikipedia pages (not the characters, who would assume their audience would know as much about Tucker Crowe as we might about Michael Jackson) inform us about Tucker Crowe’s rise to fame.