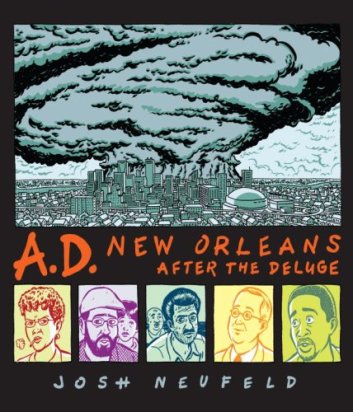 “A.D.: New Orleans After the Deluge” is a graphic novel that demonstrates the underlying theory that made Art Speigelman’s “Maus” so haunting, memorable, and successful. In our current culture, saturated by televised images of destruction, we sometimes need to see major tragedies and disasters in a completely stylized way in order to avoid becoming desensitized. With “Maus,” Speigelman used cartoon animals to re-enact the Holocaust, and the effect was disturbing and sobering: mice slammed against the wall until their heads exploded by Nazi cats. It was as if our most innocent mediums were no longer safe.

Josh Neufeld might not have been attempting something so bold as “Maus,” but this series of graphic narratives (I use the term “narratives” because it is composed of seven nonfiction biographical tales, so while the term “graphic novel” is used for all book-length comics, this definitely isn’t a fictional novel) definitely helps us to see Hurricane Katrina in a new light.Yes, we’ve seen the CNN footage. Yes, we see Spike Lee’s “When the Levees Broke.” Yes, we are outraged. Yes, we feel for the inhabitants of New Orleans. But somehow these comics heighten that feeling by forcing us to confront fresh and different images. The storm is more malevolent, more of a physical manifestation when hand-drawn. The destruction more surreal, as if–when it occurs in the comic format–it is striking New Orleans a second time.

Neufeld’s work is significant for another reason, too, this one not just aesthetic. “A.D.” represents two interesting trends: first, Neufeld used highly journalistic techniques to piece together the story, interviewing real survivors and writing their stories, a practice seen in disaster movies and documentaries, but not (necessarily) a practice I’ve seen in comics and graphic novels. And second, he published this as a blog, first and foremost, and then collected it into the graphic novel. In short, this is a book that is highly representative not just of our times and of the major event framing our times, but also of the many different mediums that we currently use to communicate and to publish; it’s nonfiction, and it’s journalism, and it’s an artistic representation/reaction to a real event, and it’s comics, and it’s a blog, and it’s a book…Neufeld certainly covers his bases, here.