“The Slim Shady LP” had introduced the world to a prankster, a rapper named Eminem and his crazed alter ego Slim Shady, who both seemed custom-made to combat the boy bands and bubble-gum pop of late ’90s radio. The characters swapped songs on that first CD, with the Eminem tracks containing just a hint of I-came-from-poverty humility, the sadness of a tough former life (see the songs “Rock Bottom” and “If I Had”), and the Slim Shady tracks bursting with over-the-top expletives and violent narratives (with “My Name Is” and “Guilty Conscience” as the two main examples), but the characters would certainly grow and change in the intervening years between “The Slim Shady LP” and Eminem’s second major album, “The Marshall Mathers LP.”

The zaniness would still be there (listen to the song “Bad Meets Evil” from The Wild West soundtrack, which is the closest Eminem ever came to a Will Smith “Men in Black”-style track), but now there was a much darker tone that had settled over the songs and the characters…and we could see this dark tone creeping into Eminem’s work before “The Marshall Mathers LP” was even released, as the rapper appeared on several collaborations and soundtracks from 1999-2000. 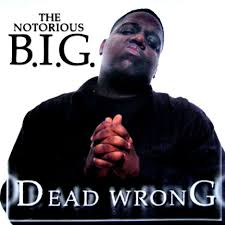 In “Dead Wrong,” we have some of the most disturbing lines we will ever find (not just on an Eminem CD, but–because of the words and their natural, matter-of-fact delivery–on any CD from a mainstream studio artist), a one-up response to the extremely graphic Notorious B.I.G. verses that came just before:

There’s several different levels to Devil worshippin: horse’s heads,
Human sacrifices, canibalism; candles and exorcism;
Animals, havin sex with ’em; camels, mammals, and rabbits,
But I don’t get into that, I kicked the habit – I just
Beat you to death with weapons that eat through the flesh
And I never eat you unless the fuckin meat looks fresh

I copied these lyrics from an online lyric depot, but it even feels dirty to look at them. Yes, the songs from the original album had their share of disgusting images, but now it seemed as though Eminem was making a statement: “I will never be a pop icon. I am not cuddly and accessible, and I resent that anyone would think so.”

And “Murder, Murder (Remix)” remains one of the grittiest records I can remember Eminem recording, a song that–like Obie Trice’s “Dope Jobs Homeless”–just feels like a lyrical portrait of the hopelessness of Detroit:

Left the keys in the van, with a gat in each hand.
Went up in Eastland and shot a policeman.
Fuck a peace plan, if a citizen bystands
the shit is in my hands, here’s yo’ lifespan…

…But I ain’t set to flee the scene of the crime just yet
Cause I got a daughter to feed
And $200 ain’t enough to water the seed.
The best thing would be for me to leave Taco Bell and hit up Chess King
And have the lady at the desk bring
Money from the safe in the back, stepped in wavin the Mack,
Cooperate, and we can operate, and save an attack…

And in his verse with Dr. Dre on “Forgot About Dre,” we see the against-all-odds/ I’ve-made-it optimism of the first album beginning to fade; we see a discomfort with fame and pop stardom. It will grow stronger by the time we hear “The Way I Am” and “Stan,” but check out how the Eminem character seems to be using this opportunity to show the world how he identifies with Dr. Dre, his mentor, the man who’s been through all of this already. After all, Eminem sings the chorus:

This is what fame means? That no matter how important you were, a new generation will forget you? That you are doomed, regardless of what you produce? It’s a realization that we hadn’t seen so vividly in that first gleeful album, and it manifests itself with violence in the verse itself:

So what do you say to somebody you hate
Or anybody tryin to bring trouble your way?
Wanna resolve things in a bloodier way?
Just study your tape of NWA.

And Eminem also appeared on “What’s the Difference?” from Dr. Dre’s Chronic 2001, where the friendship with Dre became more pronounced, where that feeling of joyless fame again seemed to creep into the lyrics, and where we hear real sadness and camaraderie-under-fire:

Stop the beat a minute! I got somethin to say.
Dre, I wanna tell you this shit right now while this fuckin weed is in me.
(Dre: What The fuck?)

I don’t know if I ever told you this, but I love you, dawg,
I got your motherfuckin back, just know this shit.

But this was just the build-up to what would come with “The Marshall Mathers LP.” This was just the character telling us–in his guest appearances–that all was not well in his life, that the merry prankster who had challenged mainstream music just a year earlier would not reappear in quite the same way. We could not expect the same feeling of an impoverished/ blue-collar kid from Detroit, happy to be there, happy for the attention, dreaming of a new life while sweeping away the gnawing concerns of the old. No, no, no. The characters we would see in the songs of 2000 and 2001 would bring to mind another B.I.G. song, certainly, but the reaction to dealing with “Mo Money, Mo Problems” would be distinctive to these specific characters (in other words, Eminem didn’t just write a general song about how mo money causes mo problems), and that reaction would cause a new set of complications in the lives of all of his characters, a continued rising action that would compel us to see what would happen to Eminem, Slim Shady, and Marshall Mathers in “The Eminem Show.” Each new album, then, was a reaction to complications created from the last. And the complications themselves would grew continuously more complicated.

next – The Marshall Mathers LP

One response to “The Epic Eminem Analysis: Part II”