It’s taken me a little while to process my thoughts on “Into the Wild,” which (I suppose) is another way of saying that it’s a complex movie about complex characters without any single clear message. The very best literature avoids easy answers, opting instead for questions, and “Into the Wild” definitely fits this mold. It also covers a wide spectrum of emotions, making us both love and hate the protagonist, making us (depending on the scene) hope that he fails, and hope that he succeeds.

And there are moments of real beauty in the film, also, shots of incredible simplicity that also carry incredible power. There’s never a dull moment in the imagery of the film, and director Sean Penn knows this, milking the scenery and the long shots for all they’re worth.

But there’s also an uneven quality to “Into the Wild,” a sense that perhaps Penn didn’t really have a clear mission in mind as he set out to adapt this book into a film. Much like the protagonist at the center of the story, Christopher McCandless, he was intoxicated by the romance of the wild, the romance of life away from evil evil society, and so he just went at it. And though I am certain that he loved every minute of the filmmaking process (there’s definitely a true passion on display in every shot), I’m just not sure what to make of it all because I don’t think Penn was quite sure what to do with it all.

When Jon Krakauer decided to write a book about McCandless, it seems to have been for the same reason that he decided to write about Pat Tillman, or the extremist Mormon murders in Utah…the same reason that Truman Capote wrote about the unexplained murders in Kansas that became “In Cold Blood.” Krakauer was curious. Krakauer wanted to figure out how a boy with such potential, such a future, such means and education, could simply leave it all behind, tell no one, elude all family for over a year, and then wind up dead in an abandoned bus in the wild of Alaska. How does such a thing happen? What is the story behind this? That seems to have been Krakauer’s motivation as a journalist and writer: to piece together the mystery of McCandless. 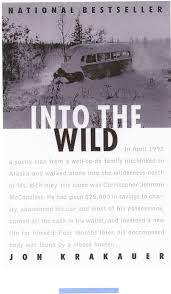 But Penn’s motivation must have been entirely different. After all, this isn’t a brand-new documentary which exposes new facts about the story. This is just a visual depiction of the book. And as Penn adapted the book, he transformed McCandless from a subject of inquiry into a protagonist. After all, we watch nonfiction in a completely different way than we watch fiction, and this movie utilizes the techniques of fiction, not nonfiction. Now as we are viewing, we aren’t watching out of simple curiosity (the way we might if this were nonfiction), but we are watching in order to sympathize with a protagonist…and that’s really tough to do with this particular character. There are moments when he is interesting, sure, and moments when we care about him, but also quite a few moments where he is absolutely unlikable (the way he abandons his family and his sister is mean-spirited, and actually represents all that he claims to hate about “society” and how people treat one another). His philosophies about truth and fairness and life and other abstract concepts are about as intriguing as a high schooler’s poetry.

As a protagonist, McCandless is less compelling than he is as a subject of nonfiction inquiry, and this is the real mistake behind Penn’s focus. He doesn’t realize the difference. And so the movie sometimes seems as if it is celebrating McCandless’ decision, and other times seems as if it is condemning it, because nonfiction generally takes a side. Nonfiction (and documentaries), by its very nature, is an argument. Society is evil, and we should all live in the wild. Or family is good and pure, and should not be abandoned. Etc. But fiction doesn’t need to take a side. Or, rather, fiction should only take the side of its protagonist, making us care as much as possible about that protagonist, even when this character does some really stupid stuff. But, as great as Emile Hirsch was in this film, “Into the Wild” seemed more about statements than about truly getting to know Christopher McCandless: that’s why the camera falls in love with the scenery, and that’s why some moments in the film try to make social/ political statements. It’s not about McCandless; it’s about putting the book onto the screen, taking a fiction approach with nonfiction.

And while there are moments that are engaging, and while it’s all very pretty, it sort of reminds me of a specialty pizza (BBQ chicken and cheddar, or “The Caesar Salad Pizza”). Interesting for a slice, but not something you can really stand behind. A gimmick, not as honest as the mozzarella and pepperoni that we’ve come to love.