So I recently watched the mini-series “Into the West,” a fairly epic look at a full century of violence and conflict and tragedy as a result of American expansionism. While the filmmakers re-created the San Francisco Gold Rush, the murder and destruction of Kansas settlers by Missouri slave-owners, and the massacre at Wounded Knee, I thought they missed a great opportunity by failing to show how the establishment of the Church of Jesus Christ of Latter-Day Saints impacted (and was impacted by) westward expansion. There’s so much potential there…

And then I came across “September Dawn,” and I thought it might make a nice complement to “Into the West.” Here we’d have a film that would show us the violence born of conflict between Mormon settlers and Christian pioneers. 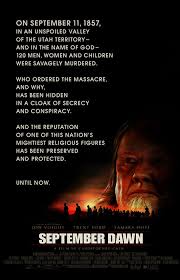 But “September Dawn” never really lived up to my expectations, particularly because it felt more like it wanted to be a shocking documentary than a character-based drama. It seemed more interested in showing Brigham Young’s testimony and connection the cold-blooded massacre of Christian settlers, even though Young was never an important part of the story itself, than it did in fleshing out the protagonists. At times, it even seemed uncomfortably close to an anti-Mormon propaganda piece, a film whose sole purpose is not to explore how these events affected/impacted the characters at the story’s core, but a film that instead simply wants to shout, “Hey! Look at how bad the Mormons are!”

If you want to know the flaws of the Mormon Church, read “Under the Banner of Heaven.” Or, perhaps, someone might someday make a good documentary about the Mountain Meadows Massacre someday. Every church has its problems, its hypocrisies, its dirty past, but there’s got to be more to a piece of historical fiction than simply “exposing the dirty past.”

So the major flaw here is this: if a filmmaker’s sole purpose in creating a piece of fiction is to actually create social commentary, why not just write a book as Krakauer did, or film a documentary? Why fiction? Well, I don’t know for sure, but if I had to guess, I’d say that the filmmakers were just lazy; they didn’t want to be bothered by a rigid adherence to facts, so they just created a loose fictionalized account of the event. And so, overall, they wind up with a lazy and weak film.