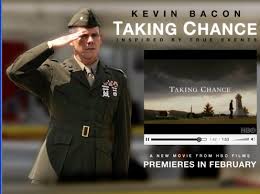 “Taking Chance” is one of only a handful of films that has attempted to document the American experience in the Iraq War, and has actually succeeded. So many of the Hollywood attempts to deal with the war have been either preachy or disjointed (or both), mainly because they were more concerned with politics than with the real human characters at the center of the stories. Think of “Rendition,” which–for all the crying and shouting–seemed less about honest character development and more about Big Statements.

“Generation Kill” was quite the opposite: it was like “The Wire” in Iraq, the story of soldiers struggling against institutional failure. And “The Hurt Locker” showed us a trio of characters whose motivations for combat led to real human tragedy (off the battlefield, at least).

“Taking Chance” is a quiet film, a very patient film, and it never once actually goes to Iraq. But it is extremely powerful and resonant because it is so ridiculously honest. And there are moments when you think it’s going to make a political statement, but you realize…no, it’s just showing how this particular character attempts to negotiate a world teeming with politics, without ever allowing the politics to affect him.

There’s not a lot to the movie or to the story. Quite simply, Kevin Bacon stars as a military officer who volunteers to be an escort for a fallen soldier’s remains; the film is the journey home, and ends with the funeral for the family. Very simple, but it’s an emotional experience…not as epic as “The Deer Hunter,” of course, but affecting in the same sort of way.