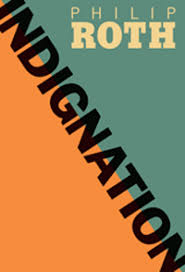 Philip Roth has made a career out of creating characters who put themselves through absolute hell. Nearly every one of his protagonists, it seems, could lead a fulfilling life, but they all seem to sabotage themselves with their own stubborn decisions and outbursts. In the world of Philip Roth, a happy and satisfying existence seems as if it is always within reach for the characters…if they could only just shut up for a little while. And therein lay the tragedy of each new Roth novel, an American Dream that is both visible and never attainable.

“Indignation,” of course, is no exception. In fact, it is the most efficient example of this type of storytelling. The protagonist, Marcus Messner, is an intelligent young man whose father has worked hard to send him off to school; he is socially awkward, sure, but he has all the potential in the world, and with the Korean War raging at the far end of the globe, he has even avoided a violent stint in the military.

But Messner allows his anger (and his “indignation,” heh heh) overrule his better judgment. For him, there is symbolism in every action and reaction, every gesture, every conversation, and so he eventually winds up crafting his own destruction. And in Roth’s trademark voice (pretension to the extreme, the very hyperbole of academia), the events are both tragic and comic.

Even several months after reading “Indignation,” though, I’m still undecided on the ending. We have a point-of-view shift and a jarring transition into a short epilogue that changes (in just a few final pages) the entire direction of the narrative, the entire tone, and our overall perception of the book’s central focus. It’s almost as if Roth had just finished reading or watching “Atonement” and thought, “Hey…I’ve never done a twist ending before! That might be interesting.” On the one hand, it felt like a sucker-punch (in a good way) that spoke volumes about the book’s overall theme; but on the other hand, it also felt very forced, and (like many twists) causes us to question how much of the preceding narrative was even necessary to get us to this ending…

Roth is such a gifted writer, though, that you do come to respect that decision simply because he is still trying out new strategies here on his 29th overall book. Maybe you like it, maybe you don’t. But Roth is essentially telling us, “Keep reading my books. You never really know what’s going to happen, and you’re always getting something new.”