“The Photographer” is quite possibly the most inventive book I’ve ever read, and it’s a testament to the author(s) that it stands as an amazing example of a memoir, a piece of literary journalism, a graphic novel, a book of photo journalism, and (most accurately) a piece of “mixed-media literature.” 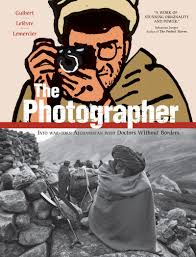 I’ll get back to that idea of “mixed-media” in a moment, but first, I’ve also got to say that…well…I’ve grown very weary of books and stories that are born entirely of white/middle-class/American guilt. Books that seem to exist to make a social statement (and often, they actually make a good social statement), but that find themselves sold at Barnes & Noble and on Oprah, and marketed to people with money and good homes and stable families, etc., who want to feel bad about the world around them, but whose activism generally stops after the final page of the book is finished. They are books that, yes, raise social consciousness and expose terrible injustices (drug abuse, epidemics, child soldiers, rape), but the publishers themselves don’t really care about those injustices…the publishers just know that these books sell a LOT of copies…and the readers only consume them in order to feel like they are a more responsible world citizen.

What’s wrong with this line of thinking? Well, it’s not dangerous. It’s just annoying. Often, it devalues books that do not attempt to raise social consciousness (trust me: I’ve heard readers remark about how they will only invest their time in this single genre), and it devalues the “art” of the book itself. For example, there’s a review right below mine on Shelfari which states, “I loved learning about the Afghani people…It was a great reminder that despite its many flaws we are very lucky to have access to any medical system…While I understood [the protagonist’s] desperation to get home [at the end of the novel], I was disturbed by his selfishness and lack of consideration.” The art of this particular memoir, the brilliance and honesty with which it crafts a complex narrator who will not always behave well, is discarded by this reader when he/she sees that the book has become about the character and not the social issue. And that’s a style of reading that winds up constraining what great literature is able to do, and what publishers are willing to publish.

In any case, though, I’ll just say that I was wary of “The Photographer” for this simple reason. It seems like a preachy social consciousness book, as if it was published just a year or two ago in an effort to protest the continued military action in Afghanistan.

And I’m so happy to say that, while the book does illuminate Afghani life and culture, it’s about the narrator’s journey…his understanding of that culture, his difficulty in adapting, his need to leave, his desires, his aspirations…yes, it contains real social commentary, but that isn’t the “purpose” behind this book. “The Photographer” is a memoir, first and foremost, and fulfills all that we expect of great life narratives. It isn’t preachy. And it’s far enough removed from the Afghanistan of 1986 that we have additional perspective, and our emotional attachment to the events isn’t so strong as to cloud our reading experience (imagine reading a 9/11 narrative two weeks after 9/11…you’re going to cry no matter what…now read it in the year 2020…chances are, you’ll be better able to appreciate it as a piece of literature).

But because this was written by a photojournalist, it’s also got a unique style of narration that does indeed feel educational. So there are moments when it feels like literary journalism. (In a way, it bears a striking similarity to “Maus,” which relies upon the transcribed interviews and stories of the narrator’s father to shed light on events that the narrator does not recall, or was not present at). Technically, you can read this as memoir or journalism and still be satisfied, so long as you realize that it is a piece of literature that creates complex characters, and often does not give easy answers. 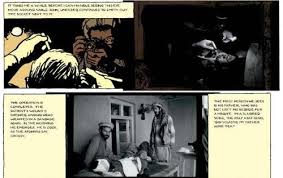 Now, about the “mixed-media literature” comment I made above. While Mark Danielewski’s “House of Leaves” might still stand as the most impressive example of a mixed-media novel, “The Photographer” isn’t far behind (if it’s behind at all). But this is a graphic novel, not a “text-based” novel, so we do expect that it’s going to graphic-based from the start. But the inclusion of real photographs interspersed with the hand-drawn comic art was absolutely brilliant, and our view of the characters and situations becomes so much richer for the twisting and bending of mediums throughout. And Guibert’s strategic placement of the photos also creates great tension and drama; sometimes the photos are sprawled out, tiny, like a roll of film; sometimes they occupy a full page, after the story has built to a tense crescendo. 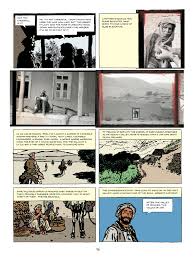 Quite simply, “The Photographer” is one of the best books I’ve ever read. As a writing instructor, I would use it in a half-dozen different classes. As a reader, it’s the type of book that absolutely destroys the experience of the next three or four books that you’ll read (unless you’re reading “Bonfire of the Vanities” or “The Stand,” the experience just can’t compare). Though it isn’t an example of “Millennial Generation Literature” (most of the Millennial Generation wasn’t even born in 1986), I think it is an example of where the next generation of literature can and will go. Not just photos and comics and text, but blogs and photos and comics and text and diagrams and logos and…but I’m getting ahead of myself. Check out “The Photographer.” You won’t be disappointed.