Though “The Descent Part II” was a nice little horror movie, a fun and sometimes-scary return to a world that…well, technically, we never really wanted to return to…it really only functions as a fun little diversion. 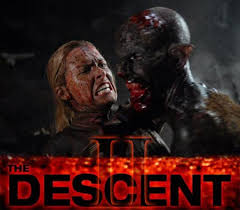 Some of the same actors return, certainly (and so the characters are involved in an ongoing story…this isn’t one of those regrettable sequels where there is little or no continuity with the first film, a la “Starship Troopers II”), and it even looks like we’re using some of the same sets (and the exact same monster-extras!). But it feels like “Candyman II,” or “Final Destination II,” one of those horror sequels that–while interesting and fun–doesn’t really do anything new. It’s content reliving the first movie, going through the motions once again, maybe offering some cool new set pieces, but mostly working from a “How can we please the fans of the first movie?” perspective.

Technically, there’s nothing wrong with this: you SHOULD want to please fans. But the very best sequels are interested in being the very best movies that they can possibly be, not just the very best sequels. That’s why “Godfather II” and “Aliens” and even “Wes Craven’s New Nightmare” were such amazing films; they broadened the universe, expanded the template of what was possible for their franchises, rather than just working within the set boundaries.

But it’s definitely a fun horror film, and if this franchise continues with the same quality of sequels, I think we’ll wind up with a very reliable and highly entertaining series…and ultimately, perhaps, a mythology for a new monster that is far more unique and exciting than the same tired ideas constantly re-used and recycled (i.e. werewolves, vampires, even Sasquatch, etc.). That’s a very good thing.