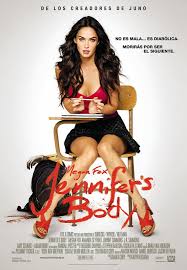 I was really hoping I’d like “Jennifer’s Body.” We’ve had quite a few good-to-great horror comedies in the last few years (most of them dealing with zombies, from “Zombieland” to “Shaun of the Dead” to “Fido”), and with “Juno” scriptwriter Diablo Cody handling the script here, I thought we might see an insightful and humorous look at high school life and the objectification of young women.

Instead, though, “Jennifer’s Body” tries to hide its cliched (and fairly uninspired and lazy) story by relying on witty dialogue and banter. There’s an interesting monster/creature at the center of the story, and Megan Fox and Amanda Seyfried are both game for a gory horror-comedy, but–in terms of high school slasher/creature features–the movie just feels like more of the same. It wants to be dark and different, but throughout the entire film, I always found myself knowing what would come next, able to see which new dot would be connected next. And as I said, it seems that Cody even knew this as she drafted the script, slopping “Juno”-style dialogue atop stale plot points.

And the worst thing about “Jennifer’s Body” (and my confidence in Diablo Cody’s career as a scriptwriter) was its reliance on a voice-over to tell us what was happening. No, not all voice-overs are bad, but all voice-overs do draw attention to themselves, because as we listen to the character tell us about his/her life and the events depicted in the film, we start to wonder who they’re talking to. Do they realize that someone is filming them (this works in “The Office,” because the characters are supposedly stuck in a documentary)? Are they telling someone their story (as is the case in films like “Forrest Gump” or “Shawshank Redemption”)? Is the voice-over supposed to function as interior thoughts (this is the case in “Dexter”)? In “Jennifer’s Body,” there’s no real reason for the voice-over other than the fact that Cody probably thought it would be cool to have a sassy narrator. There’s no consistency to when the voice-over comes; there’s no one that Seyfried is talking to, but yet she’ll talk to the audience as if she knows she is in a movie (which, of course, breaks the illusion of the movie itself).

No, wait. The voice-over isn’t the worst thing. The worst thing about “Jennifer’s Body” is that it desperately wants to be important. Not just good and/or fun (like “Zombieland”), but important, as if it has really big and interesting things to say about Women and Society and Youth and Celebrity. It’s got ambition, but it wants to fool us into thinking that it actually has something to say. In other words, it’s like a drunk guy who tries to tell a joke or story REALLY LOUD because he knows (halfway through) that he’s working with really bad material 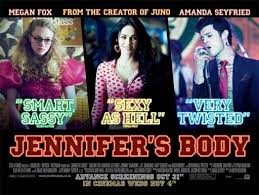