Smart kids are scary. And kids with bad intentions are scary. Especially when no one wants to believe the adult’s word over the child’s. And we’ve seen this concept played out to great and frightening success with films like “Joshua” and “The Omen.” Evil children who manipulate adults and cause ridiculous mayhem, simply because the entire world thinks that the parent is crazy.

But “Orphan” takes this concept to a level so extreme that the story loses believability, and the terror simply becomes a scream-at-the-screen frustration. 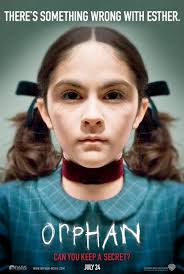 So here’s the concept: a family adopts an orphan, and the orphan is clearly evil and wants to destroy the family. And she gets away with murder, pits parent against parent, nearly kills the other children, etc. As we saw in “Joshua,” this idea can be terrifying. In that film, the father is a bit of a goober (Sam Rockwell) and the mother is bipolar, and most of the “mayhem” comes in the form of family drama: the parents fighting, blaming each other, etc., and not from over-the-top murder and explosions. That’s why “Joshua” worked. It was (mostly) under-stated.

“Orphan” is a longer film, and it is well-produced, slick, with a big budget, but the evil orphan is so ungodly brilliant and crafty that I simply stopped caring about the characters: they had no chance of surviving this child. She knew how to operate a handgun, she knew how to break her own bones in a vise grip, she knew how to blow up a treehouse with a mercenary’s precision, she knew how to hide bodies…Listen, I know that kids are often smarter than we give them credit for, but no child is as smart as the Killer Savant in the “Orphan.” There’s a difference between IQ and Experience; IQ doesn’t mean you know how to kill someone in a hospital bed and mask the death; only Experience can teach you such a thing. And where does a 10-year-old child gain such experience? (Well…the film tries to answer this question with a twist at the end, but it’s a fairly obvious twist, and it breaks about a thousand rules of logic)

But let’s just say that we accept the twist that (spoiler alert) the child is actually a Gary Coleman-style adult, an older woman who looks like a young girl but apparently doesn’t show any signs of aging and can fool orphanage after orphanage, and kill family after family. Let’s accept that wacky premise.

Now, we still have to account for the fact that the Evil Orphan also has the unique ability to be in all places at once, to sneak around without anyone knowing, to listen in on any conversation, to know when important conversations are even taking place: this ability is what has doomed so many other movie villains, from Jason Vorhees to Heath Ledger’s Joker. If the villain is too perfect, we start to wonder if it’s even possible for them to be toppled. Heck, we start to wonder why they take their time, why they don’t just off everyone quicker, why they ever make that one fatal mistake at the film’s end that proves to be their demise. I mean, seriously, I love Freddy Krueger, but the dude can invade your dreams…you have to be a moron to lose to a bunch of teenagers whose dreams you can control, right?

“Orphan” is slick, as I said, but sometimes it’s best for a villain to be bad in under-stated ways. The Perfect Villain is scary for a few minutes…until we are jolted out of the experience by their perfection, and we just wait for the inevitable moment when the Good Guys overcome, even though they aren’t smart or perfect enough to do it. When the villain is under-stated, and when the villain makes mistakes, the story is actually scarier…the villain becomes more true-to-life, maybe even unpredictable. As Janet Burroway said, sometimes Momma with a curling iron is more terrifying than Burglar with a butcher knife.

On the plus side, I do love Vera Farmiga and Peter Sarsgaard. They make the film interesting when it shouldn’t be, add layers of complexity to characters who don’t deserve so much. And now Farmiga (the wife from “Joshua”) gets to be the protagonist in a devil child film, rather than just a victim. A step up in her career!