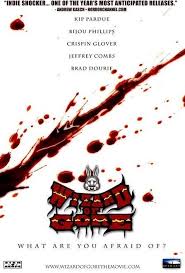 So the name of the movie is Wizard of Gore, and I know what you’re thinking: why would you ever rent a movie called Wizard of Gore and expect it to be any good?

That’s a valid question, I suppose, right up there with, “Why did you buy Redneck Zombies on VHS when you were in college?” But it might require too much personal self-assessment for a casual Monday evening.

Actually, though, the cheesy-sounding title, coupled with top-billing for the always-wacky Crispin Glover, and other spots for Brad Dourif (a horror movie icon, the voice of Chucky) and Kip Pardue (seems like a goober if you’ve only seen Driven, but he was great in Rules of Attraction), led me to believe that The Wizard of Gore might be an undiscovered gem. Maybe this was a Midnight Meat Train type of movie, some horror-loving director’s pet project that never really got the recognition that it deserved.

And for the first thirty minutes or so, the movie has potential. In fact, it has a noir-ish quality to it, with Kip Pardue dressing and behaving like a 1940s journalist despite the fact that the characters are frequenting clubs and parties for sexual deviancy. There was a vacant-sounding voice-over, even. I got my hopes up. I started thinking Dark City.

And then Crispin Glover arrived, acting weird as always, playing the part of “Montag the Magnificent,” an illusionist who lures large crowds of other weirdos (horror freaks, S&M freaks, Nazi freaks, etc.) to abandoned theaters and warehouses, and then appears to perform shows in which he hacks up the most whore-ish of female volunteers from the audience. The crowds–who had previously been skeptical of any magic tricks, and who appeared to have been desensitized to violence–are horrified…until Montag reveals the illusion and the young women reappear, unharmed, and then the crowds go wild as he asks them, “Did you feel something?”

At first, this is a fun stunt. We’re not sure where the movie is taking us, but it’s got so many strange elements in play that we trust it.

Then we get our first murder. One of the women is found dead. And the movie heads in an even stranger direction, but suddenly loses focus, becomes disjointed. The rest of the world around the characters comes into clearer focus, and (disappointingly) it seems as though it’s just a normal world. So we’re not sure what to make of Pardue’s journalist act, nor his old-school telephone or ’40s-era apartment. And then there’s an underlying plot element concerning a hallucinatory drug, and something about people being used to murder other people for unknown reasons, and really, it all just falls apart for the last thirty or forty minutes.

So Wizard of Gore isn’t an instant classic. Too bad. But I suppose I should be glad that it was bad in an interesting way, that it never became bad in a predictable mainstream sort of way.

One response to “Wizard of Gore”